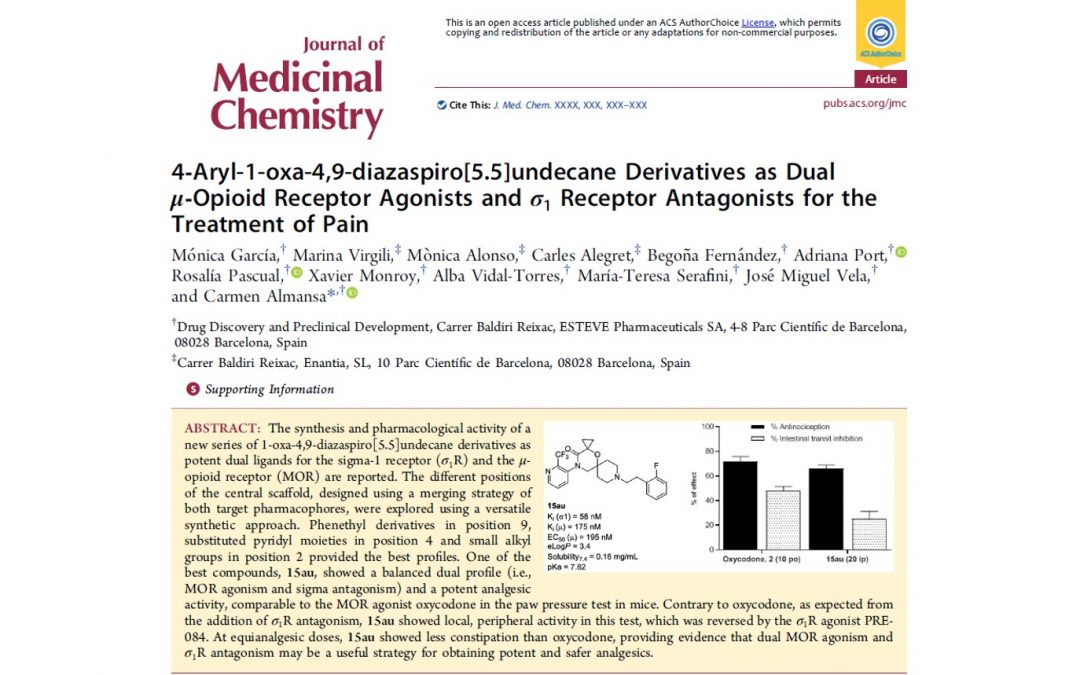 The Journal of Medicinal Chemistry has recently published some of the results obtained in our Medicinal Chemistry collaboration with Esteve Pharmaceuticals, aimed at the identification of novel dual ligands of the sigma-1 receptor (σ1R) and the μ-opioid receptor (MOR), as part of Esteve’s RD activity to develop new, potent and safer analgesics.

The chemistry work, which was carried out by Enantia’s Medicinal Chemistry team led by Dr. Marina Virgili, started with the design of the spirocyclic morpholino-piperidine core using rational drug design strategies. The efficient synthetic approach developed, allowed then for the rapid preparation of analogues with diversification in several positions of the scaffold, rendering the promising Lead described in this paper. The subsequent Lead Optimization program led to the discovery of a clinical candidate, whose identification will be reported soon.

Enantia has a long track record in Medicinal Chemistry services to the pharmaceutical industry, with more than 20 patents related to this activity, which includes the design and synthesis of new scaffolds and libraries of small molecules with potential biological activity.

In addition to conventional MedChem activities such as Hit-to-Lead and Lead Optimization programs, Structure-Activity Relationship (SAR) and Drug Metabolism and Pharmacokinetics (DMPK) interpretation, Enantia can also collaborate in the early stages of the drug development process by preparing cold labelled compounds and metabolites of a given candidate, as well as by identifying its best solid form in our Solid State department.

You can read the full paper here.