New Cocrystal Discovered at Enantia Approved by the FDA 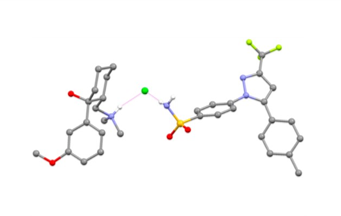 New cocrystal discovered at Enantia approved by the FDA

A new API-API pharmaceutical cocrystal discovered at Enantia for ESTEVE Pharmaceuticals and commercialised with the name of SEGLENTIS® has been recently approved by the FDA for its use in the United States.

The U.S. Federal Food & Drug Administration (FDA) has recently approved SEGLENTIS® (October 15th, 2021) for its use as acute pain treatment in adults. This new drug is an innovative API-API pharmaceutical cocrystal composed of two already commercial analgesics. Celecoxib and racemic tramadol hydrochloride are presented in a 1:1 stoichiometric ratio cocrystal and formulated as a tablet.

The discovery and development of this novel cocrystal has been carried out at ENANTIA for ESTEVE Pharmaceuticals. The drug has been licensed to KOWA Pharmaceuticals America Inc. for its commercialization in the United States, with a launch planned for this year 2022.

This announcement highlights the increasing relevance of the cocrystallization technology as an effective strategy for the design of new drugs. The improvement of some key physicochemical and pharmacokinetic properties of an API can be achieved through the obtention of a new solid form such as a cocrystal. Because of this, and the generation of new IP that cocrystals allow, pharmaceutical companies resort to this approach to launch new drugs and to manage the lifecycle of existing ones.

The approval of SEGLENTIS® is fantastic news for the pharma industry in general and for the R&D companies specialised on new solid form development, in particular. ENANTIA has been one of the introducers of cocrystals and the study of their application in different fields such as pharma and nutraceutical products, as well as in chemical process development. This drug approval evidences ENANTIA’s expertise on cocrystal engineering gained over almost 20 years since its foundation, demonstrated by the appearance of Enantia in more than 25 patent applications related to the study of cocrystals either as applicant or as inventor.

If you want to learn more about cocrystals, keep reading here.